In other news, slytherinandoutofme found a new Draco.
*dies*

His cheekbones are as sharp as his tongue

[Cross posted and backdated from a sideblog. Originally posted on 30 June 2015 and tagged for Samael.]

A set of chaplet-style prayer beads designed in honor of Odin but could easily be adapted for use with any deity associated with death, war, and/or magic. This can be found here, courtesy of FiberWytch, for $40 (layaway payment plans are possible). As can be seen by my tags, I associate this design more so with Samael than Odin.

[Cross posted and backdated from a sideblog. Originally posted 30 June 2015 and tagged for Samael.]

Around 3.30 of 2014, I accidentally butt-dialed Samael in terms of getting inspiration for a poem (I was doing homework for my Poetry workshop class). I ended up with “The Prodigal Son who doesn’t want to go home”. For my Poetry workshop in the fall of 2014 (around 10.20), I decided to revise this piece. It turned into “The Prodigal Son doesn’t want to go home”. As part of His test [WP link], Samael asked me to revise this piece (from the original), and it is what’s being shared above (written 6.20.15, shared as a screenshot because I don’t want to fuck around with recreating spacing).

Not the same being, no. I’m comparing the two as luciferian figures (yes, Christ can be considered a luciferian symbol/god! He’s not a common one, though) and examining their respective roles within their mythos.

However, there does exist a theory/interpretation that perhaps Lucifer’s rebellion and subsequent fall was in response to his own desire to take Christ’s role within the divine trinity (I believe whoreofabaddon​ has also briefly mentioned this theory before as well, but I might have a slightly different take on it than she does). I’ll attempt to flesh out my personal view of this theory, but you’ll have to bear with me—there’s a lot of background theology intertwined, most of which I’ve spoken of before in scattered bits and pieces, but for the sake of clarity I’m going to try to tie it together. Forgive me if there’s an obnoxious amount of click-through links, they’re mostly supplemental discussions/resources for those curious to learn more.

He really liked the feathers.

[Cross posted and backdated from a sideblog. Originally posted 28 June 2018 and tagged for Baphomet.] 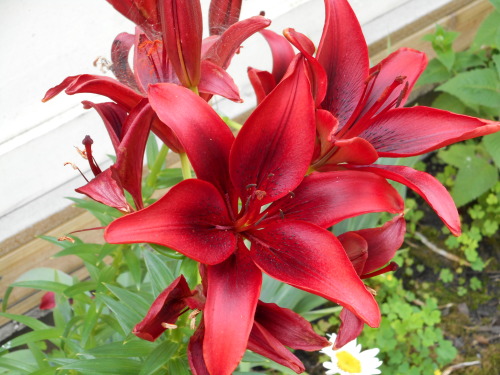 I know they’ve returned in the three years since, but I haven’t found any posts or pictures outside of two Google Photo uploads from June 2017. I’m admittedly not the best at capturing photographic evidence of moments or events.

[In the process of cross posting tumblr posts from Infernally adjacent sideblogs, I’ve found a few posts that are from WP. I’ll backdate and tag appropriately shortly.]

“When all the morning stars sang together, and all the sons of God shouted for joy” Job 38:7

When used scripturally, the title of Morningstar can refer to several different entities. The two most well-known of Morningstars, however, are also the two who are pitted as mortal enemies.—Lucifer and Christ. Personally (though I’ve found that other Luciferians also share this particular sentiment), I don’t view them as lying on opposite ends of a divine spectrum. I view Christ as a light-bearer in his own right, and as having several similarities to Lucifer himself.

Within Greek mythos, we have the brothers Phosphorous and Hesperus as sons of the Dawn—Eos. It is said that Hesperus acts as the evening star, and upon his falling his brother Phosphorous must take his place in the sky to usher in the morning and wake their mother. In general, doubt is not typically considered to be something of value to strive for within a religion or faith. Rather, it is something to be avoided at all costs.

Some questions to consider may include: How do you deal with doubt, disbelief, and skepticism within your faith and practice? What role (if any) does it play within Luciferian mythos? Does it integrate at all with your secular, day-to-day life? What are some difficulties you’ve had with this particular ideal, or how have you developed it into a personalized tool for your own practice? Do you believe uncertainty is ultimately more of a hindrance to the progression of your own faith/practice or an asset?

Preface: I’ve pulled an all-nighter; I’m starting this (at least) at a little before 8 am. It’s the fucking umpteenth day of rain / being overcast.

In terms of what I can doubt, having trouble believing, and be skeptical of – the validity of what I’ve been communicated, that a dream contains a message, The Big Questions. I use a pendulum to double check communication and as the means of communication the vast majority of the time, so considering phrasing and how to specify / generalize would handle the first part. I’m particularly guilty of ‘this is just my brain being weird, there’s obviously no message here’, so I either go ahead and ask (pendulum), or I shelve the dream and figure that it’ll repeat or be brought up in a conversation later if it’s important (not exactly the best tactic in some instances).

The Big Questions – The existence of a Deity and more than One at that, the Deity’s desire to interact with me at all, the benefits of interacting, etc. By this point in my life, I’ve settled on there being more than one Deity. There’s nothing wrong with this line of questioning and going further; I feel like I already struggled for a few years and had my polytheism harden to the point that there’s no need to return to this stage. There are many Deities, Spirits, Higher Powers, etc., and Lucifer is one of Them. No doubt at this point.

As to why Anyone would want to interact with me, it depends. On a good day, the health of Their realm is connected to the health of our’s so there’s a reason for Them to want to help us to not fuck up, and They enjoy our interaction and companionship. I don’t think all Deities and Powers require our food, drink, and energy to ‘live’, but it helps Them (like how you don’t necessarily need to eat ‘healthy’ to live, but it helps your system to function better). In some mythologies, They’re distant relations and just have an interest in us; in some modern follower’s experiences, They can still be related and that particular Power will have a vested interest in that follower.

I made the decision to not ignore Lucifer after finding out information about Him and sort of stumbling into general information on Luciferianism. After a few years, He’s made Agreements with my other Deities and has joined the main grouping that remains consistent. Perhaps He doesn’t want to miss out on the energy and attention, perhaps He wants to use my interaction as a point of connection to this realm, perhaps He finds some sort of amusement in interacting with me. Eve is recent, an Infernal Entity Who has showed up and asked for energy. I don’t really know why or what the exact benefits to Her are.

On a bad day, the brainweasels come out to play, and doubt slips into thoughts that weren’t there before. I’m a horrible devotee, my worthlessness renders my offerings worthless, and I can’t comprehend why They could possibly care about me. They can walk among us in the glimpses of smiles on strangers’ faces, the spaces between air molecules, the water cycle that keeps liquid water available in the ecosystem; They get lost in the vastness, the inhumanity, the distance. Eve’s shown up recently enough to not have this specifically apply to Her, but even Lucifer is hard to connect to when this self-doubt creeps in.

I wouldn’t say this is a form of doubt that I would want to cultivate and seek out. A dose of skepticism that X is just a coincidence keeps you grounded in the world and relaxes you from the constant worry that ‘this might be a sign’. But the doubt that shows up with the brainweasels isn’t something I want to have around for long. For dealing with it: Doing something, even if it’s the most informal, off the cuff prayer ever or the offering ties explicitly into self-care, to help keep the line of connection open. Looking for Them, particularly in the ways They manifest Hope and Light, and letting Them come to me (Lucifer, as He Who sits in the dark night with you with the soft torchlight of stars to keep light until morning). Praying for fucking sunlight. Hoping if I sleep or do something else long enough, it can be ignored into leaving.

On a less ‘where the fuck is the sun’ note, I don’t have a definite answer as to whether doubt plays a role in my mythos. Lucifer may have doubted something in God’s ‘plan’ to go searching for answers, according to one line of thought. He may have doubted the worthiness of humans to be as high as God said, perhaps. In regards to His Fall, I don’t think there was a doubt or something that caused hesitation. Eve, though. As someone who may have once been human, it’s easier to see where doubt could have come into play.

Did Eve doubt the serpent and his promise of knowledge, of being like god when She looked at the Fruit on the Tree? Knowing that God had forbade this Tree from being eaten from, but doubting God’s reasoning now, skeptical of why He’d want Her to remain unaware, without knowledge? Her mind made up for the eating and the Fall, did She doubt afterwards? “We’re naked and I can see my flaws, can’t hide from them. Is this the knowledge the serpent spoke of? Will addressing my flaws make me like god?” When God discovered the act and exiled Them from the Garden, did She doubt?

In Her first painful childbirth, in agony compared to death, did She doubt the serpent’s assurance that knowledge would not bring death? Did She stand conflicted over Abel’s body, in anguish for Her son [Abel, my baby, my baby] yet still filled with motherly love for Her son [Cain, be safe, be safe]? Did She hesitate with every pregnancy after, wary of the sin She was bearing forth? Unsure what monstrosity She would tend to with gentle hands and loving heart until it was set loose on the world? Tired of the tears and loss – every miscarriage, stillbirth, infant dead within hours and days?

Did She doubt and choose the Fruit again, and again with Her decision to stay the course of knowledge and seeking Her own divinity? And if She could doubt and choose, why can’t I?

I Am A Piano by Nakamura Asumiko.

HP (not enough for their own pages yet):

From Fandom to Family: Sharing my many thoughts
The Ace Theist
A Carnival of Aros

AHunter3's Aux Journal. Genderqueer genderinvert trying to get into print

Exploration of the Heart

Lady Of The Lake

Dark Food to Die For

Halloween food and horror recipes straight from the Devil's own Cookbook